Onwards to Tuesday 21st when a couple of politically edged bookings vie for attention. Firstly, at the Shakespeare pub, Manchester Salon’s Valuing the Arts in an Age of Austerity is one to whet the appetite of debate, given this government’s disdain towards artistic institutions often proven to not only culturally satiate, but also economically recoup. One such example is the UK Film Council, abolished last year in an early sign of Tory intent. And on the topic of film, Manchester Film Co-operative’s latest selection also screens on that Tuesday, The Lost Honour of Katharina Blum. It fits with their current ‘surveillance’ theme and takes place upstairs at The Kings Arms in Salford. 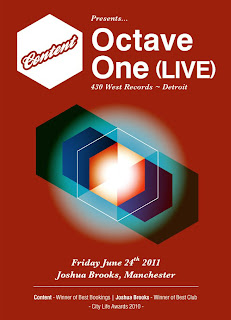 The following weekend is a busy one, ushered in by Content on Friday 24th. The tech house promoter have Octave One secured for a Joshua Brooks show. Apparently there’s another festival happening this weekend on the telly; not as far as Islington Mill are concerned. Their Alternative Glastonbury weekend may not have quite the same available acres, but it does flex its variety muscles with one69A’s t-shirt prints, Salford Zine Library, arts & crafts stalls and Shangaan Electro on Sunday 26th. Preceded by an Eastern Bloc vinyl DJing takeover on Saturday 25th, which clashes with more within the twisted electronic brains of Hoya:Hoya; Machine Drum‘s funky sampledelica at Roadhouse. 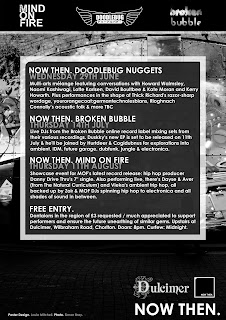 You want more? Well there is the small matter of the rearranged Now Then Doodlebug Nuggets event at Dulcimer bar in Chorlton. Mark down Wednesday 29th for that one. Plenty more to say on that one very soon, but here’s a little taster:

It’s free entry as well. And if you like what you see in the various midweek entertainment showcase then dipping into your pockets to the tune of £3 would be much appreciated to support performers and ensure the future unearthing of similar gems.

Before the month ends, on Thursday 30th there’s also the launch of half-month long performance palette Not Part Of Festival, which originally began as a more inclusive balance to the heavily funded and commissioned Manchester International Festival. Interwoven betwixt and between will be Lassfest at the Lass O’Gowrie, but more on both next month…