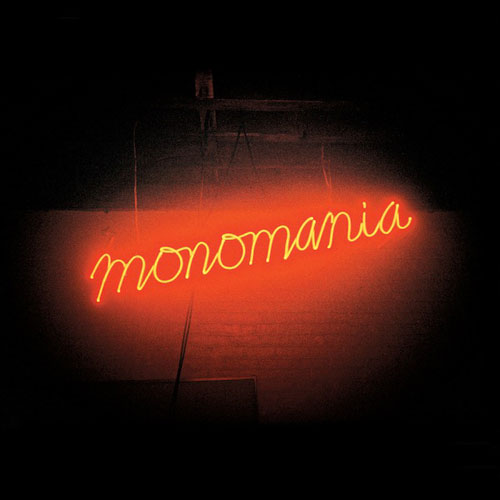 Monomania is the much anticipated follow-up to Deerhunter’s 2010 breakthrough album Halcyon Digest. Since their 2007 release Cryptograms, Deerhunter have jumped from many different musical styles; noise-rock, drone, psych-pop, shoegaze and indie-rock to name but a few. Monomania sees the band shift again but in a less dramatic fashion, predominately focusing on a more garage-rock style that still incorporates similar song-writing traits that can be heard on Microcastle and Halcyon Digest.

Front man Bradford Cox himself admits to having monomania; the excessive concentration on a particular object or idea. Cox’s obsessive monomania is music which is a possible explanation for his prolific song-writing approach (since 2005 Cox has released a total of 9 albums as well as a variety of EPs and singles). It seems a fitting title for the band and provides an interesting focal point.

The album’s opener ‘Neon Junkyard’ stutters to a start as Cox croaks his way into the song with a snarling and muffled vocal delivery that seems similar to his recent work under his solo moniker Atlas Sound. The song itself sounds very much like a classic Deerhunter song, comparable to anything from Halcyon Digest but with a rawer and more imposing sound that grows throughout the length of the song. This commanding sound is carried on into the next track ‘Leather Jacket II’ and the confrontational approach is accentuated here and seems to set up the album as Deerhunter’s rawest to date.

The images of leather jackets and junkyards only emphasise the style in which the band have found themselves focusing on in Monomania. This antagonistic tone that opens the album drops at points though; ‘The Missing’- one of the album’s highlights- sounds like it could have easily featured on Microcastle as guitarist Lockett Pundt showcases his shoegaze and dream-pop tendencies that Deerhunter fans would have come to expect from him.

If this hints at a drop back into more familiar Deerhunter territory then it is quashed instantly, as the rest of the album’s first side is steeped in an almost country-like style, albeit lingering under a torrent of fuzz and feedback. Prior to its release Cox discussed the influence of Hank Williams and Bo Diddley on his song writing for the album and this is very much evident on ‘Pensacola’ and ‘Dream Captain’. Where this could come across as a very reactionary and contrived American roots style of music, the tongue-in-cheek lyrics come across as ironic and humorous as a symbol of its originality. The album’s first half is strong in terms of the quality of the songs individually but differentiates in tone and style as a whole. The second half however seems to be a much more focused effort.

The stripped back songs ‘T.H.M’ and ‘Nitebike’ sound very similar to those of Cox’s latest Atlas Sound record Parallex, incorporating the same echoed and hissing vocal delivery. ‘Sleepwalking’ and ‘Back to the Middle’ are an obvious pairing and present themselves as two of the strongest songs on the album, although not as daring as those that come before it on the first half. Despite their lack of adventure they are steeped in the same sound that proved to be a winning formula on the albums prior to Monomania. These lead into the album’s title track; a raucous and stomping garage song that forms into a tremendous, distorted wall of sound, with Cox shouting “mono-mono-mania”, as if it were an impassioned chant, and proves to be the album’s highlight.

The record finishes with ‘Punk (La Vie Anterieure)’ and is a classic Deerhunter track that, like ‘Monomania’ but less confrontational, swells into an overwhelming yet focused sound that works perfectly as the album’s closer. Monomania is of an overall good quality and another addition to Deerhunter’s enviable discography, but at times it feels as if it lacks direction. The album does not have a clear, show-stopping track too like Microcastle’s ‘Nothing Ever Happened’, or Halcyon Digest’s ‘Helicopter’. Although the title track could be Monomania’s clear stand out, the album feels as though it is lacking the special quality of one or two tracks that could transform Monomania from a very strong record into an exceptional one that would be seen as equal to, or better than, Halcyon Digest. Following this change in direction, it will be interesting to see what musical route Cox and Deerhunter shall take next.

Deerhunter – Monomania was released on 4AD Records on 7th May 2013.